Yes we DO need diversity!

Websters Definition of Diversity: 1. The state or fact of being diverse. Difference. Unlikeness. 2. Variety. Multiformity. 3. A point of difference.

Social diversity is the existence of multiple cultures and types of people in any given area.

Throughout history people of many beliefs, lifestyles, creeds, ethnic backgrounds, religions, disability and more have staked their claim to human rights the same as any man. This has been backed and enforced by the Constitution of the United States of America, similar constitutions of other countries and laws around the world.

"We hold these truths to be self-evident, that all men are created equal, that they are endowed by their Creator with certain unalienable Rights, that among these are Life, Liberty and the pursuit of Happiness." Constitution of The United States of America (Thomas Jefferson).

See that quote? I has come to mean so much more than the paragraph you see in the Constitution. I means social acceptance without being shunned or judged. It means not being discriminated against for status of race, color, religion, sex, HANDICAP, familial status, or national origin. Yes, I capitalized that word on purpose.

I means having equal opportunities at good housing, employment, education, and medical care (insurance too).

It's why hate crimes are considered particularly heinous in nature.

Sadly, in the autism community the term is being horribly misused and misunderstood. I have been told and shown that, supposedly, you cannot be accepting of the search for an autism "cure" in any fashion and be for diversity at the same time. This is 100% in error. I can believe what ever I want to and telling me that I "can't" is wrong. The Constitution and Law say it's wrong. Let's take a look at why the two subjects should have just about nothing to do with each other. 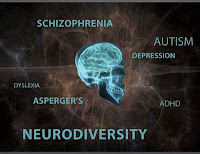 1: I found a comment at a blog I will not publicize that stated, "Neurodiversity is just a way for lazy people to get on disability." The very wording of such a statement is bigoted against the disabled and highly discriminatory. It proves that diversity and acceptance really are important. If one rude person on the internet is willing to publish such a horrible thought, how many more ignorant people are out there in housing, workforce, or the medical field who will discriminate because an autistic person happens to be on disability as well? It's supposed to be wrong to hold an entire community to task for the lies of an individual. If someone is frauding the system, that's on them as a person. It's not on the whole community of race, creed, sex, etc.

2: A cure is a better idea because then no one would need diversity: Again, faulty logic. This ignores the very fact that there is no cure and there are varied forms of autism. It ignores the fact that there are people out there right now, who deserve acceptance and the same rights as the rest of us, whether you look for a cure or not. It's like some of the activists for a "cure" expect people of the autism community to just suck it up and get over it. It's like they expect autistic people to put their lives on hold (medical costs, education and all) and wait for the golden miracle cure. Because with that cure, all problems would be solved.

If you want to find a "cure", go ahead, that is your right. Stop bashing people who just want to be accepted like the Constitution says they should.

And now... for the other side, just to be fair. Concerns against a "cure".

1: That it will be forced on autistic people to change them: I've said it before and I will say it again: That would be illegal. Also, again, there is no cure. That makes fearing a "cure" at this time akin to fearing the boogeyman.

2: That babies will be aborted: Fact, babies are already being aborted. This cannot and will not have that much of a change on those numbers. How do I know this? Take other medical conditions into account. Down Syndrome; I personally know just as many parents who knew they were having a child with Down Syndrome and didn't abort as any who said they did. For any of these situations there are people of all kinds and beliefs. This makes the abortion concern another empty fear. If you want to be against abortion, then go out and do so. Abortion is real, a "cure" is not. Work with something that is real. You'll get a lot more out of it.

3: People will be told not to have babies or start families if they have autism. That is discriminatory and should be reported if any social worker says this to you. No one has the right to tell you if you can have kids. Naturally, there are situations where a person is unfit to have children in the first place. That's different. But, if you are fit, and there's every chance you are, report any worker who says that to you. Report any nurse too. It's discrimination, simple as that.

For people who actually believe that load of tripe about avoiding having children if you autism, I have this: You need to do some research and get an education. If you want to save the world from medical conditions or "types" of people, there are plenty of deadly lifestyles and diseases you can take up arms against. Maybe you could help against crime or drug addiction? You know, things that are actually KILLING people. How about standing against spousal and child abuse? Just a thought.

Diversity is needed, it stands with historical evidence into the dark ages. It has nothing to do with seeking a cure. Mixing them just creates uneducated fear.

So, one more time: A "cure" has nothing to do with the fact that all people deserve acceptance and understanding. ABSOLUTELY NOTHING.
Posted by David Wilde at 11:17 AM No comments:

Autism and Fear of Storms 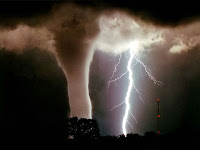 I received a message from Ashley who said: "I'm wondering if you've had the experience of maybe you child becoming overly obsessive about bad weather conditions? With the tornado warnings and every thing recently my son has been really worried about it... thanks for any help you could lend."

The weather is a larger than life and ominous force to a child. If your child is on the spectrum and is sensitive to routine (almost all of them are) then the weather serves as even more of an anxiety. It's hard to feel safe and secure with something a million times your size that you see no routine in. If you think seasonal changes are tough, try having your child obsess over daily weather conditions.

Now add in seasonal conditions like tornadoes and floods. We see their destruction on television all the time. Our kids see that and say "oh no!". They associate the condition globally. What happens in one place, happens everywhere. My son is afraid of floods. For a while, rain water that could fill just the gutter, was enough to incite panic. It still takes some reassurance today when rain starts coming down hard. Now, he studies tornadoes, volcanoes, and other giant weather factors as a source of fascination. It helps that school has supported educational issues on his fears as well as myself.

First, we have to understand that this is a real fear and we shouldn't diminish it or punish it.

Second, we have to understand that resolving this will not happen overnight. It will take some time and repeated application of education and support.

Third, use education. Find age appropriate books about weather that he can look at for himself (yes, or herself). Teach him about weather as it applies to where you live. There are even books on fearing weather as children. I don't have the titles but your local library can help you.

Teach him what to do in bad weather and give him his own weather kit with blanket, flashlight, and radio. Reinforce that he has a family that loves him and will protect him. Show him that safety from weather is done as a family at home or a team effort at school.

If he's old enough, show him how to check the weather. If, not, check it on your internet and show him. Education is the answer. Love, support and education will help your child understand that the weather is something we have to live with, but we understand it and know what to do for safety in bad weather.

Remember, our autistic kids work best with direct simple facts. It also helps to make learning about weather an accomplishment of some kind to boost confidence. Use lots of praise for learning, even if it doesn't seem to affect your child because of their autism.
Posted by David Wilde at 7:28 AM 2 comments:

Defiance and Respect in Autism Youth

This blog is dedicated to a question from Kimberly, who asked: "My teen who has Autism is overly dramatic and has a hard time with accepting no as an answer is this typical or is mine just out of control?"

First of all, it's likely a lot more typical than you realize. From age 9 where puberty starts kicking in, through the teen years, you are seeing a mixture of the autism and hormones. This can make your standard teen drama and angst look like a trip to Disneyland.

You can expect over-reactions to most things as well as snippy attitudes and excessive, "my parents don't know anything" attitude.

This is a LINK I posted on my Facebook profile recently. Scroll down and check out the advice given for a 9 year old (that's how old my son is too).

For a teen, I would suggest pretty much the same approach. Pick your battles. When given a consequence he's going to tell you off. Ignore it. Yes it's disrespectful, but the more you give it the time of day, the more you help create the power struggle. I've learned this the hard way. Since then, I've taken parenting classes at Boys Town (I think you can order their tapes, they were very helpful to me) and joined a parenting support group. Maybe there's one in your area?

Another thing to remember, is that our autism kids are delayed in emotional development significantly to a varied point of years. Add that to all those teen hormones and, well, you read what I said above.

Here are a couple other links with advice on dealing with autistic teens:

Conduct Disorders Website: Scroll down in the answers for what people had to say after you check out the lady's problems with her teen son.

I like the idea of meeting an outburst with uncomfortable silence and a blank stare. My 9 year old has the tendency to tell me, just like the one teen boy, that I will not exercise what ever consequence I just informed him of. It happens anyway, without another word. If he throws a fit and breaks his toys, they are gone for good. Anything he throws that doesn't break is lost to him for several days. Currently it's 3 and that seems to annoy him down the line. He wants it eventually and I shake my head and tell him: "I can't give it to you because you threw it in a tantrum. You will get it back on Friday (or whatever day is 3 out)." This makes it appear a rule I also have to follow. It shows that rules are followed by everyone and actions have consequences.

Our kids need tons and tons of practice and there is no overnight solution. Just know that you are not alone in your struggles with your autistic teen.
Posted by David Wilde at 6:41 AM No comments: