It's no secret that I'm not nice to anti-vaxxers. Especially one who is on the page of Dr. Richard Pan (politician doing what he can for vaccines) calling people EVIL in all caps. Hit the link and check out the page and comments. There is a constant war for representation of information about vaccines. Anti-vaxxers push the mark. One even went after a woman's children in her profile pic but that's a different story. So let's get started with my assessment of how this woman represents her business. First: 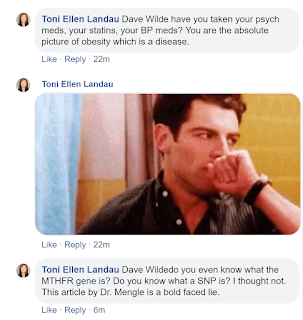 Click for closer view. Toni owns Tranquil Touch Therapeutic Massage and Esthetics. It's listed on her personal page an there is a Facebook page for it HERE. The gif you see is of a man gagging. If you go into Facebook gifs and type in the word 'gagging' it was the first that came up. Now to explain the discussion it went like this. She posted some anti vaccine information that was blatantly untrue and inaccurate. I posted that it was no more accurate than calling her a pro disease psychopath. The image is her response.

Now fat shaming is wrong. Fat shaming by a business that claims to help people is unacceptable. I contacted her via her business page and offered to write a review. I wanted a public apology both to teach her a lesson for her online behavior in fat shaming and diagnosing online without credentials AND spreading anti vaccine misinformation. But she is the only one who brought up  her vaccine position as a defense for her actions. My problem here is soley that she pulled fat shaming. Anti vaccine crap is just where it came from. 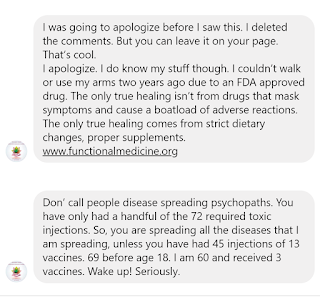 Frankly, not only is it a non apology but downright confusing. At first I thought she was trying to defend diagnosing me via a time she couldn't walk or use her arms. Then I figured out she was defending her vaccine position again. Bypassing her behavior altogether. Then she proceeded to tell me my medical history in which she is 100% incorrect. She still doesn't get that she has no place putting her nose in my medical history. What is she using, a crystal ball? It's broken.

I have to wonder at people who come to her for help with their problems and are also over weight. Does she consider them a disease too? She is not a medical doctor, nor does she have an MD in anything at all. But if you are going to run a business that claims to care for the health of others, especially the way her page presents, you better treat people with the decency you expect. That goes moreso than for the average people you talk to on the internet. She presents with a built in responsibility that she failed. And I always call that out. 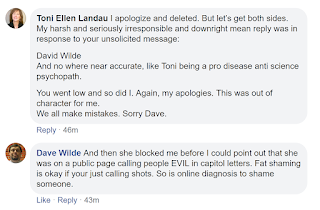 Like her doing the snipe and block on my page. She quotes me, supporting my above explanation and the blocks me. Very professional.

So I have to say that if I were near her business (and my sister works in a massage parlor business and was licensed in the state of Colorado) I would not go to her. I would not like the idea that she fat shames people she doesn't like. That doesn't deserve my money and I feel bad for anyone with the slightest weight problem who sees her. OH, and my sisters kids all have their shots.

As for vaccines. It's a serious problem with national outbreaks heading for 1000 cases fast. That's the threshold by statistics where you can expect someone to die. You can also expect permanent damage to some such as hearing and vision loss or encephalitis. Natural measles can erase the immune systems defenses. And for anyone who says vaccines caused the outbreaks (and they do) I point out that since 2006, 3 billion MMR vaccines have been administered in the US. If it went like anti-vaxxers believe, there would be more than 1000 cases per year, closer to multi millions of cases, but as you know, that's not true.

So if you are in Doylestown, PA and considering seeing a massage therapist, I wouldn't advise going there.
Posted by David Wilde at 10:02 AM 1 comment: