My personal view of the word CURE

Sometimes it just doesn't pay to say anything, especially on the internet. I recently got into a discussion that derailed over the use of the word "cure". Here were some of the points of view:

-A couple of people felt that people should stop using the word altogether in light of autism. They find it offensive and compare it to vulgar racial slang.

-There were the viewpoints of how looking for a cure is offensive.

I do not think all people with autism need a cure.

I do think getting personally offended because someone else wants a cure (what ever that may be) is a waste of energy.

My opinion on stopping people from saying cure in regard to autism is that it won't work. It's an unrealistic approach and there are better ways to educate people. It also won't work because, like autism itself, you are crossing a variety of personaly points of view on the word. Unfortunately, I couldn't get my real point of view past the instantaneous offense taken on the other side.

You see, I prefer to dislike the derogatory behavior more than any word. The behavior is the root of the issue. Truly derogatory or bigoted people can find more words to use.

That brings me to my next point. If you want people to stop being derogatory to you, then you need to show the same courtesy you expect of them. If you are honestly going across the internet page in question with remarks like:

Well, then you'll only be seen as a hypocrite and you'll get the same respect you give.  And attacking people as a general group (NTs)... how can you do that and then demand they accept you?

When someone attacks you, do you feel like accepting them? Of course not! You want distance from that person and plenty of it.

But, this is a discussion I have had enough of. I refuse to try and be polite and helpful to people who will turn around and go to war with me. I'm not your enemy. I am not pro-cure and I am not anti-cure. I know that there is no cure and fear is our greatest enemy. I know that how you treat someone is how you will be treated in return. Your behavior speaks volumes. The "cure" debate is now on my "banned" list because it's just too volatile and stressful to deal with on either side, and that's a big red flag people should pay attention to.

I end this with a link to my best blog on the "cure" debate I could have ever written and then that is that. LINK
Posted by David Wilde at 5:53 AM 2 comments:

My son has a powerful sense of imagination. It's clear to me that it's very vivid to him and has created concern. Not only can he drift off in his imagination at any unexpected moment, but it can be very hard to reel him in. It takes him off task and delays in getting things done. Drifting off into your own world is fairly common for children with autism (who were once considered Asperger's). But what if this is something more than imagination? What are the risks of hallucinations. What do you watch for?

Having a powerful imagination can be unsettling. Just ask Stephen King, who once stated in an interview that he uses a nightlight or leaves his closet light on. Maybe he said that to sell on how scary his stories can be, but then again, who remembers being scared of the dark as a child? A vivid imagination can take some understanding.

According to the article in this LINK, there is a significant difference you can watch for. Better yet, let me quote it:

"True hallucinations, unlike normal childhood imaginary play, are often frightening to the child and cause great distress. They come on suddenly without warning and often linger around for a while before suddenly disappearing. Whether the hallucinations are short or last for a longer duration, the fear and panic they cause the child is very real."

Hallucinations are not part of the description of the autism scale and its comorbidities. But that doesn't make them impossible.  While schizoprenia is extremely rare in children, there are other things that can lend to hallucination. You can see them in the same article but here:

Imagination is powerful, there's no doubt about that, but most of it is normal under given circumstances. If your child is excited about Christmas or Easter, for example, he or she may swear up and down that they saw Santa Claus or the Easter Bunny. This is fine and changes as they catch up in maturity.

Speaking of maturity, it's also important to remember that our autism kids (Asperger's) are often delayed in maturity so this may happen in years that are considered inappropriate. Support to your child and reminders of reality versus imagination are usually sufficient in coping with this process. Under most circumstances, such as seeing Santa Claus, you can disregard. You don't want to put undue pressure on your child to mature at a pace they aren't capable of.
Posted by David Wilde at 7:37 AM No comments: 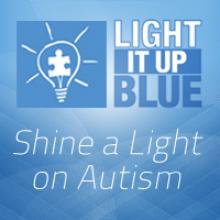 Whenever I see a comment that says "Autism is everyday, not just once a year" in reference to Autism Day, I have to pause for a moment. Some say that just to add to awareness, but some are genuinely insulted that there is a day on the calendar named for our cause. And that's not just the cause of people like me who are lucky enough to be verbal, or parents working with their children, but everyone who lives with autism, everyone.

Having a day on the calendar given to us in this manner is not to suggest that people should only pay attention to autism once a year. It is a grand step towards educating and awareness and we should all be proud of it and thankful for it. Every step that goes towards awareness is a good one and having a day is no small achievement. And lets also not forget that April is also Autism Awarenes Month!

Let me put it another way with an example. Take Veteran's day. Veterans should be thanked whenever you come across them, not just once a year. But there's a lot more to veterans day than that, isn't there? It's a day set to commemorate them and honor them.

Yes, to those of us who live with autism, it's every day. To those who don't, we need to not expect people to wake up and pay homage to autism every day. There's only so much you can expect out of people who don't live with it. There's a fine line between education (awareness) and shoving something down someone's throat. Don't shove it down their throats, the results always turn out bad.

Now, look how far Autism Day has come. It's gone from being celebrated with blurbs in the newspaper to being heralded on all media sources. I saw an advertisement that said "make it blue" and liked that. It's for awareness and everyone sees it. It won't be long before you go buy a calendar and find it marked on that day. That's a great achievement towards awareness.

The day is an honor, not an insult. It's recognition, not ignorance. Should efforts continue to provide awareness and education year round? Of course! No one is saying it shouldn't.
Posted by David Wilde at 4:47 AM No comments: