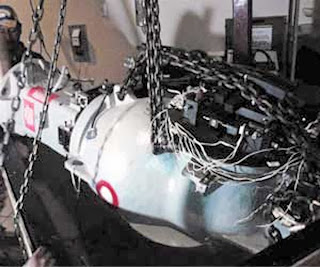 New this week, apparently a couple of real class crooks stole a truck in Mexico. On this truck, packed in a crate, was highly radioactive medical equipment being transported to storage. This equipment was used in cancer therapies using  a synthetic material called Cobalt 60. Fearful thoughts spreading say that this could be used to make a dirty bomb that could kill a lot of people. Uh, no.

Let me just put your thoughts to rest on this.

2: Too much work to get to it.  Look at the picture. See the casing? That's going be damn hard to open. It's got inches and layers of metal shielding including steel and lead that won't be a fast job to cut through. It certainly won't be a job for a couple guys in a back alley shed (yeah they might be smarter than that, but hang on to that thought). Even once they do, they have a whole new problem on their hands.

3: Too hot to handle. What good is a bomb if you're dead before you can even deliver it, or finish building it? Think about that for a second. There's a reason this stuff is totally shielded without so much as a window to peek at the thumb sized portion inside. That's because it's gamma radiation and that stuff goes through glass, plastic, and yeah, pretty much all shielding like it's not even there. Even with all the shielding already on it, it's still radioactive. But that's just it, look at how much shielding it takes just to let it sit there. Trying to build a bomb with it means that you have to handle it directly. Even with robot arms and a plastic container, you may as well be working with it NAKED. Yes, naked; because none of that stuff will  protect you at all. Even then...

4: Likely to fail: Reports on Cobalt 60 state that it would be "extremely difficult" to get it to disperse over a large area. It's just a very difficult to work with compound for anything except its radioactive properties as they stand. Again, there are theories on getting it to dissipate, but no one has managed to pull it off. No one has tried that can be found. There are simply no reports at all. You can say "cover up" if you want but what's the point in that? Haven't we used and tested way meaner stuff on our own soil before?  If this could do that kind of damage, I strongly doubt it could be covered up or would be. It would leave a helluva mess (if it could even be done).

5: They probably just wanted the truck. That's what's most likely. These guys probably don't know they are carrying their own untimely deaths in that truck. Once they do realize it, they'll probably just dump it. The truck had a crane on it and other machinery. They may have wanted it to sell for scrap. Who knows. And what supports this theory?

6: Not the first time this has happened. Actually there is a long list out there of losses and thefts of medical equipment. None of them involved a bomb. In these cases, the thieves had no idea what they were in for. In one case, it was sold as scrap and several people got sick and a couple died. In another case, Petco had to recall metal dog bowls that had been made from scrap containing Cobalt 60 and were giving off dangerous levels of radiation.

And before you get all smart and ask why people didn't die making the dog bowls... that was all made by machinery after smelting processes and machines don't get radiation poisoning. Further, going through all that without killing a whole city of people just goes to show that Cobalt 60 just doesn't work that way. Otherwise, there would be a whole smelting plant of dead workers out there and, nope, there isn't. Never happened. Not going to. Now let's just watch the news and see what happens to the idiots.

(image from World News NBC)
Posted by David Wilde at 12:02 PM No comments: