Feeling full of yourself? Have some delusions on how right you are? Here's an idea, offer up a 100 dollars for someone to prove you wrong. That's what Ailan Hong of Long Beach, California decided to do on the page of politician Dr. Pan regarding vaccines. Let's line this up.

First of all, what he was on about. In a method of attacking Dr. Pan he accused Pan of lying about reports of Dr. Robert Sears being disciplined by the California Medical board. That would be THIS case (click on link). He posts a letter from Dr. Sears claiming that there is no discipline against him like this: 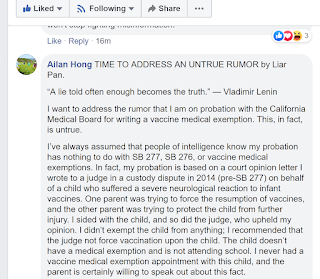 Then he posts to me that if I can prove there is disciplinary action he'll give me 100 bucks like so: 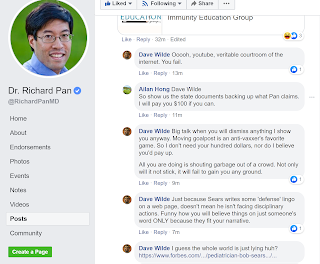 Well, I certainly pulled that off via the link above and another .gov link leading to THIS. There is even a witness to my success who I block out for her own security. 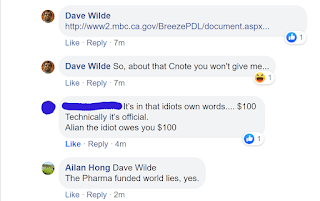 I know, you'll point out I said I didn't need his money, but that doesn't mean he doesn't owe it. Currently he's dancing around the subject and cherry picking flimsy rebuttals as anti-vaxxers are known to do. I know I'm very unlikely to get paid here, but I'm not letting it go simply because Ailan deserves to be held to task. And I'm not the only person who thinks so via another witness as follows. 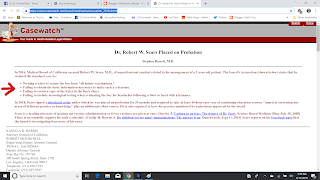 Posted by David Wilde at 5:40 PM No comments: