People with autism have no empathy? 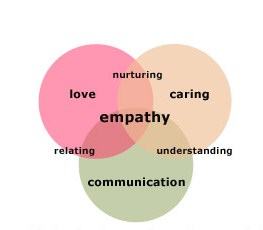 I've heard this myth before, but apparently there are "professionals" give it strength and growth. This essentially groups people on the spectrum with the like of outright psychopaths. To me this is becoming slap-worthy. Someone needs to slap some sense into these people.

There is a great big difference between being able to show feelings and being able to feel them. Just because someone has problems showing you how they feel, doesn't mean they are incapable of feeling anything. And yes, I'm talking about for other people. This is a hurtful classification that spreads stigma.

As a high functioning adult, when ever I see someone in trouble, the first instinct I have is to help them somehow. That's not because I'll get some reward for doing it (I don't), but because that person needs help. Since that's my first instinct, I would assume I have some empathy for how that person feels in their plight. I actually care about peoples feelings very much. This might be why I did over 19 years worth of work in protection and law enforcement jobs. It might be why I'm very protective of my family. I love them.

People who take the time to get to know me also know that I care about others very much.

I've also personally met several on the spectrum who voice that they have feelings too.

The lower the functional ability of  a person on the spectrum, the harder it is to interact with the world around them. That doesn't mean they are incapable of caring or feeling. I can remember when people used to think there wasn't anyone inside of those people at all. Studies have proven that wrong.

These "professionals" who write us off as having no empathy are doing just that; writing us off. To them, Asperger's or any autism is just like any other mental illness or psychosis and that's dead wrong.

So, next time you hear someone saying that we have no empathy; look them in the face and say: "I'm sorry you feel that way, but you're wrong." And then just walk away.  I know not all of use can do that. I also know that there may just be enough of us who can. Let's blast this myth out of the water, shall we?
Posted by David Wilde at 8:09 AM 2 comments:

My thoughts on racism after the Zimmerman trial

The purpose of this post is not to debate the Zimmerman trial. So please, I'm not looking for any rage on my page. Okay? However, all the raging and debating I have seen has finally brought me to writing this. Also, I was inspired by a fellow on Facebook. Time to bring this to light.

To me, the color of your skin is nothing more than a means of physical identification. That's it, that's all. I prefer not to mix the color of your skin with your culture either. Let's go with Black Culture for a second. What is that? And better yet, which one? African Culture? Hip Hop Culture? Yes, I've had people tell me that Hip Hop is a Black Culture, so I'm only quoting them (and they were African American people too, so argue with them). The point is, that if you just say Black Culture, you could be referring to several ways of thinking on several ways of life. I've seen this first hand. Isn't it interesting that in all the persons of any one color of skin across the whole planet, there are still dozens of cultures? Hundreds even. That's why I don't care to use the color of your skin to associate with your culture.

Here's what we all are above all. We are the Human Race. We are a species. Once you look past the color of skin; we all have the same types of organs. We are inter-mixable. A man of any color can make a baby with a woman of any color. We all get the same diseases, have the same emotional capabilities, and can commit the same atrocities. So, when the most powerful forces in the universe don't discriminate, whey do we? I'll tell you why.

Because the human race has a lot to learn to accept itself as a species of intellects instead of just a bunch of colors.

Here's another thought for you: Polar bears are white and Kodiaks are brown. Neither of them give a damn. BOTH of them will KILL you no matter what color YOU are. You see, while we use color to identify them for science; all we really need to remember is their behavior. In the case of bears, we need to remember that, no matter what color they are, we need to stay the hell away from them or risk getting mauled.

I can even take it to the inanimate. If I pick up two rocks that are the same size and weight, but are different colors, and I throw them at you; can you tell me which one hurt more? Probably not, but I've just assaulted you with rocks. That's a behavior that lands me in jail, regardless of why I did it.

I'm all for abolishing racism. Unfortunately, if you go at it too hard, you can become a racist yourself. It's a vicious double edge sword that will poison you if you aren't careful. So I'm going to make a risky example:

If you go around saying: I hate all  you white supremacists. That's a racist comment. As soon as you interject color as the basis of your anger or hatred, it's racist. What you really hate, is the behavior of some people in profiling others based on color. Behavior, people, that's what the deal is. Remember that or risk being a hypocrite. I also don't think they should be called "white" supremacists, just racial supremacists. Take the color right out of the equation and the wind right out of their sails.

So, there it is. My thoughts on racism as spurred by the riots and rage. (Come on, looting a Wal-Mart? Really?). Also spurred by people hating on each other on Facebook. What are you really achieving with that? Nothing.
Posted by David Wilde at 7:39 AM 4 comments: