On Friday, December 14th, 2012, in Newton, Connecticut, Adam Lanza embarked on a mission of death and destruction. He took two 9mm handguns and shot his mother to death. That wasn't enough for him as he took those guns to Sandy Hook Elementary and opened fire in two classrooms. 20 children of ages 5-10 and 6 adults lost their lives.

The media calls this the second worst shooting of it's kind due to the death toll. I say it is the absolute worst of its kind due to its depth of depravity. Historically school shootings have taken the lives of adults. Horrifically, Adam Lanza chose to kill small children.

I am personally horrified at what has happened and my heart goes out to all the families who have suffered such a terrible loss. It's the worst loss any parent could suffer.

But what about the report that Adam had autism? If you read this Huffington Post article, you'll note that there are many discrepancies being mentioned. Just compare to this AP article (sorry I lost the link and now cannot find it, but you really should google search and compare for yourself).

-Huffington reports that he may have autism OR a personality disorder. This tells me that no one knows what he had or how. This is very important! When the media reports that some spree killer gunman was autistic, they create stigma among the uneducated that hurts the autism community.

-Reports on the guns being properly registered is also debated. Some sources say they weren't and at least one says they were. Not that it matters how they were registered at the bottom line. Adam clearly would have used them either way.

-Reports that his mother worked for the school are debated. Apparently there is report that no one at the school knew who she was.

Obviously, the media is not the best source to learn about autism. And I'll say this too: autism does not mean homicidal. Honestly, anyone can become homicidal and there are a wide variety of factors that add together to explain why. Until the media can get the story absolutely straight, we aren't going to know why he did what he did. There's only one thing that matters; what he did was heinous and an act of despicable terror. We need to remember this.

Again, my heart goes out to the families. My own youngest is 10 and I know all of you parents out there share the sentiment. Adam Lanza, for what ever he was dealing with, decided to become a killer. Now there are so many young minds scarred from his final acts in life. I hope they concentrate on the lives and minds of those poor kids. I also hope they eventually get the story straight.
Posted by David Wilde at 8:06 AM No comments:

You sent this 10 year old to meet Stan Lee! 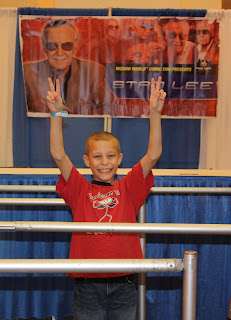 Yes you did! I'm talking to all the wonderful people who donated to this cause and gave my son the morale boost and memory of a lifetime.  Today I show you how the convention went for my son. I really hope this makes it around to everyone who pitched in to this cause. I will share it several times to try and make sure.

The autograph signing and photo were done at two separate times. Both times required one of the hardest things a child with autism can do; wait in line. The autograph happened first and we got in line early. Lots of people were there to capitalize on getting Stan Lee's autograph and it amazed me. There was a man ahead of us with two huge stacks of comic books to be signed. What's even more amazing about that is that he had to pay 55 dollars for each one. I'm sure he must have paid over a thousand dollars for all those autographs. Seeing people do this explained clearly for me why it cost so much. All these people wanted was for their collections to be worth more money. Stan Lee deserved every dollar he got from them and more.

We had a copy of How to draw comics the Marvel Way, by Stan Lee and John Buscema. I let Denver hand him the book when our turn came. Denver tried to tell him about the class project he did where he pretended to be a statue of Stan Lee (class wax museum project) and he couldn't get his voice up over the crowd. I helped him and Stan Lee said; "Well I hope he got a good grade!" with a wide smile. I said he did and we were on  our way. It was a great experience but it would be topped.

When time came to stand in line for the photo ops, it was another long line and it took some time. There were lots of people who paid "VIP" so they could go first (just as many as who didn't) so that seemed a little ridiculous but it mattered little once we got there. One of the volunteers came through and told everyone that no one was to shake Stan Lee's hand. I could understand this because we are talking about an 89 year old man. A hundred people squeezing his hands would have to really hurt in short order. 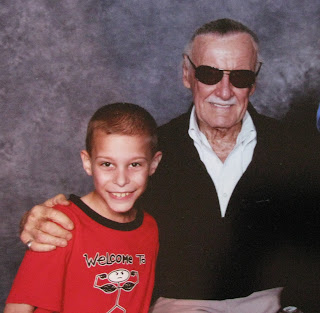 Once our turn came, Stan Lee recognized Denver from before and we were to stand on either side of him. Denver wasn't sure where to stand exactly and that's when Stan Lee reached out and put his arm around Denver. "Come on over here, bud. Now look right over there at the camera." Denver heard  loud and clear, that no one was allowed to touch the man. Having Stan "the Man" Lee put an arm around him after that announcement made it just that much more special. You can see it on his face in the photo and he came away from it ecstatic. Stan Lee made this a very special occasion and he has my thanks. What an amazing achievement for this 10 year old! And that's not all he got to do. I submit this series of photos of Denver's convention adventure after the events with Stan Lee. Hey, we still had the weekend to work with! 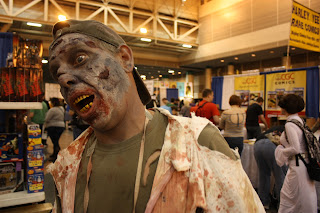 Denver ran circles around us from this guy, but he was laughing so it was all good.

More pictures will be posted today at my Facebook Page
Posted by David Wilde at 7:39 AM 3 comments: