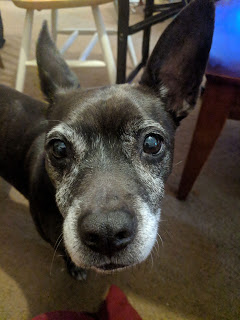 Brindy the mini pitbull. Brindy the dingbat. Brindy the dumb runaway dog. We adopted Brindy about 6 years ago. She's the result of someone breeding designer dogs via pit bulls crossed with Boston terriers. I personally call the breed 'dingbat' and you have to see both her ears erect to see why. Brindy came with costs. Heavy costs. 700 dollars to put her through heart worm treatment with a 50/50 chance of survival. The treatment gave her premature graying in the face but she lived.

Brindy has a problem. She's a runaway dog. She is in love with the idea of running as hard as she can as far as she can. She doesn't pause to sniff anything until she's at least six blocks away. She's learned that someone will be trying to catch her and she's learned all the tricks to that.

Offering a car ride used to be the cinch. She would jump right in for a car ride. But she learned that meant going straight home. So to hell with that idea. Her newest trick, since she learned we will follow her with the car, is to go to the railroad tracks and avoid us that way. The only thing she hasn't learned is to avoid strangers. She will go right up to other people except that they are afraid of her and won't help us catch her.

This is why her address and my phone number are on her tags. But recently, she managed to force off her address tag from her collar and it was on the table when she decided to run again. Most of the time, she dashes out the front door and she's very good at picking her time. So we kennel her if we having pizza delivered or company over. Today, she got out through the backyard fence.

"But wait, don't you play with your dog or do anything with her?"

Why yes we do. This dog gets to go out and play ball an average of 8 times a day. If you don't take her out when she wants, she will stare lasers through your head until you do. She's a very spoiled and extremely demanding while completely disobedient dog. She's ridiculous with it and never satisfied. My son was throwing ball for her as I pulled up in the driveway from dropping my wife off at work. That's when she decided ball just wasn't enough for her. 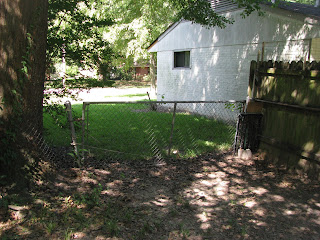 Now for the other problem. As you can see by the pictures we have a large gate for part of our fenced in back yard. It's badly warped and I've had to force it to the ground with long metal stakes. I've had to tie it off with wire and strap boards to and bricks to block the end off.

It doesn't work. She can push aside everything I put at the corner and wiggle out and I can't stop her. My son stared dumbfounded as teens sometimes do, instead of running to stop her. I couldn't get out of the car fast enough, and she was gone. It sure looks like she can't be trusted to play her favorite game anymore. By the way, we rent. 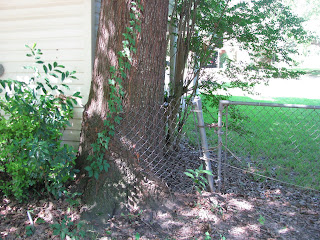 Yep, we rent and there is zero chance that this gate will ever be corrected. No one has cared for at least 20 years or so as that tree grew into the side of the house and warped it. I'm just glad that's the shed built into the house that is being destroyed by the two trees growing into it. You can even see the fence post that's been swallowed by the base of the tree. The electric company hates us because they can't bring their trucks into the yard to fix transformers when they blow twice a year. Too bad so sad.

So that's the situation. You might say, 'gee, she's so smart to learn all that'. No. She's stupid. 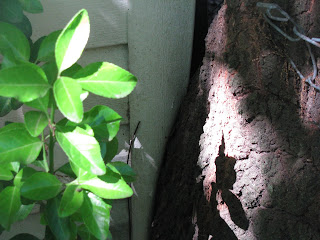 Stupid to run away and risk her life possible loss of the family that's put hundreds to thousands of dollars into her health and living. Stupid to run off from her favorite ball to do all that. Today we had to chase her to the point of her own physical exhaustion in high southern heat. To me, that's stupid. Not smart. 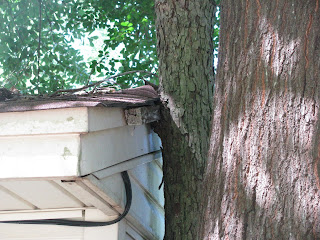 One day we will be moving on from here. If we still have a dog at that time (if she doesn't get herself killed before then) we will seek a home with a really good fence. Until then, we do our best to contain her, but her ball playing days may be at an end for a while if she really prefers to play escape instead.
Posted by David Wilde at 9:12 AM No comments:

So you like the idea of a SPACE FORCE eh?

But the budget! That's the outcry of any political party when they don't like a proposed program or bailout or whatever. Both sides play that game and I could take up time citing evidence on the matter but that would be a whole new blog post. One thing is for sure, when it comes to something they want to do, the budget can just go screw itself.  Nothing screams of this more than Space Force and I'm going to show you why.

Never mind Trump's wall that has little to no effect on immigration as a whole and just makes us look bad, Space Force is going to outdo any costs a nation-long wall could produce. And let me remind you that the administration is having trouble finding money to finish it. Just look it up. But the wall is only an example toward costs so lets not get stuck on it for this discussion.

Trump said he wants a military force in space. Not satellites, not a laser defense system (which is all Reagan's Star Wars would have been and it couldn't be finished either), no, he wants a military force. That means soldiers and military equipment in space. Let me start by explaining to you that, to be a military sized force, it will need at least as many people as in our Coast Guard (the smallest of our forces) and that's currently about 40,000 people.

"But they just need to be available to go to space." No. Then they aren't what Trump wants. He wants a presence in space. Not on the ground. He said so himself. Even if that's what he settles for, it won't change the astronomical costs of the issue. Pun intended. Here is the video of his statement if you are still confused.

So what's the deal with the cost? Well, since we are talking about military, let's do some comparison.

It costs an average of 50,000 dollars to train on US soldier for the average training time of 16 weeks. That includes basic training and advanced individual training. Many AITs go longer than 8 weeks however so the cost can up to as much as 100,000. But for basic infantry, it's about 50k.

You can't send basic infantry into space. Here's why.

They all have to be pilots and have at least a thousand hours flight time. That costs about 9 million dollars. Multiply by 40k and you have 360 billion dollars. That's just for learning to fly. You see, you're agreeing with a military force of astronauts and that's a whole lot of money that just isn't there.

From what I can tell, and exact numbers aren't easy to find, full training of an astronaut that requires 2 years costs around 50 million dollars per person. That's factoring in 9 million to flight train and the costs of launching them into space in the first place. What it costs to send up a space shuttle? About 500 million dollars.  That's just for one flight crew and all their equipment and living supplies mostly by weight and fuel. That's maybe as many as 12 people. And no matter how you rearrange it, it's going to be about that cost per 12 people. Because you can't just send a person into space without the things they need to survive.

So, 500 million per 12 people and you want to send up a force of 40k. 40k divided by 12 is: (my calculator comes up with a row of 3s so you round down and get:) 3300 shuttles going into space (and that's actually not quite enough) with a price tag of over 16 billion, 500 million dollars. That's just to actually PUT them in space.

But wait, that's only if all they are trained to be is astronauts. That' won't work. They have to be a full arrangement of military specialists as well. You have to take construction engineers and rocket scientists, train them to be astronauts and send them up. You have to have all the skills of any ground military additional astronaut trained to go into space and just float there for their service requirement. Then you have to arm them.

Do you know why they don't take guns into space? Uh oh. Can't do that so we'll be setting up orbital missile stations instead. And if we pull it off, that means everyone else will pull it off too. That brings me to my next point.

Satellites and space debris. There are 1100 active satellites in space and 2600 defunct ones right now. That's a total of 3700 chunks of various metal floating up there right now. Each has to have a very specific flight path or they risk running into each other. Now, we depend on those satellites for an awful lot of stuff, like phones, television, information technology of all kinds and in some places internet. Quite a few of those support active military forces on the ground.  Can you imagine the levels of interference putting a military force of 40k up there would cause. Because, like I just pointed out, we won't be the only ones. China, Russia, and the UK would be right behind us and both China and Russia would want to show us up by putting double as many people up there.

Let me just mention that 40k people is about the population of any small city. So, we are basically looking at just tossing four or five small cities into orbit. Think about it. They all have to move along with the planet and have to be adjusted constantly to no one slams into each other or any other debris because we also have billions of tons of wasted debris floating around our planet as well. Did you know that? It's absolutely true.

So, I don't know how many orbiting missile stations that puts in our atmosphere, but sooner or later, the more you put up there, the higher the chance that something screws up and comes back down. You better hope it's not a missile station with God knows how much ordinance on it, and that it never makes it to the surface. Oh, you don't think they would make it? Now why would we put missiles in orbit that can't reach their targets on the ground? THINK ABOUT IT.

"Oh they would have failsafes for that and detonate them."  Uh huh, go ahead and bet your life on that. I won't. Nothing is infallible. Sooner or later there will be fights in orbit and that means death in orbit and more debris in orbit and more falling to the ground than we or our atmosphere can handle.

Mark my words, we will destroy our atmosphere and risk millions to billions of lives. If the money factors aren't enough, the livelihood of the world should be.

REFERENCES:
What NASA pays to ship people into space

So you want to be an astronaut

Posted by David Wilde at 9:32 AM No comments: