Why some people wear their mask in the car

I recently posted on my facebook page about some painted rock art some cruel ass did that you can see here. I'm not giving that person any credit either but their post had over 2000 likes. That's 2000 people that agree wearing your mask in your car makes you retarded. It's a sad turn that a chunk of our society has taken. These are the same people who have run off to Parler to create an echo chamber so they only hear what they agree with. But for the rest of you who still have any compassion or really want to understand, I'm about to share some reasons we wear our masks in the car. Many of these echo responses to my facebook post. So shoutout to those who shared their reasons. Here is the image I'm talking about. 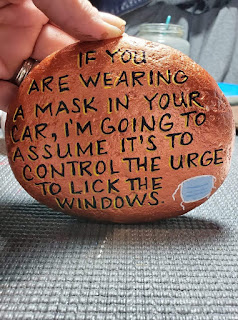 Calling people retarded for taking any level of precautions when you fucking won't is so classy. In case you hadn't figured, this post is not going to be forgiving of people who follow this lack of logic and level of cruelty. Because if you are mocking people for this, you may as well be mocking the kid in the wheelchair. You suck. So about those reasons you can't fathom (or actually want to know).
1: Less hassle: If I have more than one place to go and I'm trying to move quickly, I will leave the mask on. It's just less hassle and I move quickly and efficiently to get done and get home. But according to this person, efficiency is retarded.
2: Sanitary reasons: As one friend put it to me, she doesn't take her mask off until she gets home and can wash her hands before touching her face. She has medical issues she can't take risks with (like a lot of us) and can't just "stay home durrrrr" because we have to live our lives too and can't count on someone else to do it for us. Safety measures are smart, not retarded. You want to know what's retarded? Playing Russian roulette with a disease that picks its victims with a blindfold and dartboard because we still don't know enough about how it kills some people.
3:  On the job: Some people drive Lyft and Uber and they have to wear a mask as well as have fares wear one. In case you can't comprehend that, it's a matter of having complete strangers in your vehicle with you for any amount of time and well less than six feet away from you in an enclosed space. And for reason number one, they may as well leave it on between fares until they can get somewhere to disinfect the car and themselves.
But kneejerk motherfuckers who point and laugh don't use enough of their gray matter to figure any of this out without a damn list. You don't know shit about that person or their life to point and laugh or call them retarded. 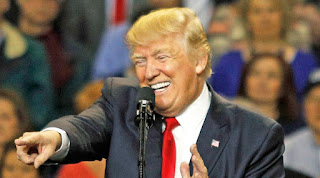 These are people who have taken to showing off their shitty side since 2016 and they haven't gotten any nicer since. But I tell you what, I would so much rather know what kind of asshole I'm avoiding than not at this point in time. So go ahead and show off your shit side and think you're really clever for it. You aren't. You are showing a decided lack of empathy and intelligence and you should fix that.
It distresses me to further say that I have relatives who apparently think this way. How disappointing that is. How disappointing it is that we can't be kind and respect people anymore.

Posted by David Wilde at 7:52 AM No comments:

My minor review of Presidents I have known 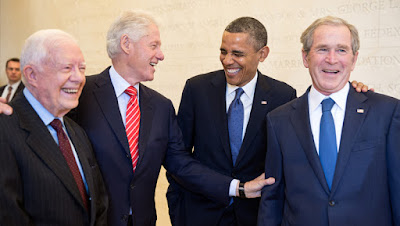 Now that the election is basically decided, I want to talk about my personal experience and view on Presidents. I’m only going back to 1988 when I became of legal voting age. I don’t know enough about the Presidents before that but can tell you that just about every POTUS has done something I didn’t like.

Ronald Reagan was in office before I started voting. All I ever heard about was Reaganomics and how he had the beginnings of Alzheimer’s. People made fun of him, but I never really understood it. A little secret for you, I wasn’t an active voter at first. 1988 was an election year and it was George Bush Sr vs Michael Dukakis. I definitely remember the “dookie” jokes. But I didn’t understand it, and no one ever explained it to me. I had to learn about them on my own. I do remember the unbridled hatred against gay people of any kind. I remember gay hate crimes in the news. There were definitely bad things that were applied to politics just like today. Oh, but what did Reagan do that I didn’t like? Well, he closed mental hospitals across the country but didn’t make up anywhere for the patients to go. No programs for them of any kind other than go to jail.

Republicans ran EVERYTHING back then and there were only 9 blue states at the time based on the votes for George. The one thing I remember about him is the words “Read my lips, no new taxes”. Words he later ate with an abundance of salt. Words that echoed when he ran against Bill Clinton. George Sr was a strong President abroad in working with other countries and ending some conflicts before they began. But Americans paid for every bit of it and then some. I remember jobs being hard to find and colleges being predatory. Some still are. Bigotry against about every kind of person other than white and straight and without mental illness were everywhere.

Bill Clinton has a documented record of fulfilling the most campaign promises for a President of the age than any other. Economic reports showed job growth across the board and taxes eased up on the poor a bit. Then came the whole Monica Lewinsky ordeal. I remember everyone acting like this is the first time there has ever been a sex scandal in the White House. Not true of course with accounts against Jefferson, Cleveland, Nixon, Reagan, both Georges and Trump (Trump being the only one with multiple allegations). I did vote for Bill and I was quite disappointed when he did that. Still, I have come to learn that the honor of the White House was tainted long ago. That doesn’t mean I excuse it or even accept it. I hated that he did that and still do. But overall, on the rest, he was a very successful President. And he still left the office after two terms with the highest in office approval rating of any President in history. Try to figure that out.

George Jr really left me torn. He did some good things early on with No Child Left Behind (scrapped by Trump) and Medicare part D made to support AIDS treatments (I have heard mixed reviews on that though). He responded to 911 with flair and sought justice, but ultimately that was where things spun the wrong way. He is criticized for going after WMDs that were never found, while usurping Saddam had to be done, it was the wrong way to do it. He got in bed with the oil companies, had a hand in the housing collapse and a major recession worse the one at the end of his father’s term. And at the end of it all, before he left the house, he laughed and admitted his lies with a follow up of “so what?”. His administration was also responsible for the “forced” back to work programs (like the one I had to go to) that were found unconstitutional and drug tests for food stamps found equally so. The poor were hurt bad and the middle class all but disappeared.

Barrack Obama was something of a showboat in allowing his name to be used in movies and such. His downfalls were early on with bailouts to corporations that used the money to go on lavish vacations and fining people for not affording health insurance. I remember the health insurance website that was riddled with issues when it first hit the internet, and no one could use it but faced penalties anyway. There were people who saw their health care costs skyrocket while others were fully covered. And it made little sense. It has need renovation for some time. Not total annihilation but reform and adjustments. Still, Obama had a lot of work to do and he was trying to mend a shattered economy after the recession and housing collapse. It was a mess that would take longer than he had to be President to fix. And as he left the office, much of his programs were coming to fruition... until Trump dismantled them all just for having his name on it. While I didn’t agree with those early problems, things were coming around from what I saw towards the end. And the Obama blaming would be a chief weapon for the next four years after him.

Now we come to Trump. This is where I end this segment. Because my point is that no matter who the President is, if I don’t like something they do, I will say so and I have that right just like you do. What I have to say about the further actions of Trump good or evil are too much for here. I will say this, something all the other President’s do that Trump does not… they all hang out together; engage in humanitarian projects together, and still advise each other. Trump would not hear from any of them.