"You should park where you belong" says local business owner to disabled man. 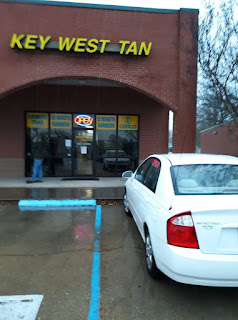 I partook of time with friends at a business in Key West Plaza, West Monroe. I'm not naming that business because this event had nothing to do with where I took my business, rather where I parked. But Key West Tan gets mentioned because this occurred via the owner of that business. I don't know what this man's name was, but I'm sure others through out the business area do. Here is what happened.

The man came to find me, asking about the car I parked as seen in the image. I thought something had happened to it so I found the man asking about me, and brought his attention to myself. He confided that he wished for me to move my vehicle from the space in front of his store for the sake of his patrons.

This is where I point out that the rain poured in buckets outside. Furthermore there were and are no signs or any form of assigned parking (save for disabled) in the entire plaza shopping center. On the side of the business (Key West Tan) are four parking spaces directly attached to his business. There is no way in any portion of the parking lot that you can avoid being rained on, by parking there. I am disabled, walk with a cane (most of the time) due to complications with my disability, Multiple Sclerosis. However, my parking placard is expired. So all I could do was move the car out to the middle of the parking lot to get the most rain exposure possible. These are all important factors to this story.

Initially, though quite disturbed at the idea that this man was willing to go business to business to hunt me down for where I parked, I did move the car. But then I noticed that there was no sign indicating he could ask that of me and I changed my mind. I had quite a few things I would need help getting to my car as it were, never mind travelling a wet slick parking lot with a four pod cane. I had every bit as much right to park right where I did and he had no legal recourse to ask me to move. So I put the car right back in the same space and went back about my business trying to enjoy the day with friends.

Mr. Tan Owner came back to make a point and I didn't let him.

"Before you say a word," I said. "tow me." Yeah, it wasn't a nice thing to say, but his treatment of me was about to get worse, so I don't feel so bad about it.

The man went out to his truck, got his phone, and as far as I could tell... called the police. Since there was a possibility of police, I got out my phone, took my cane because the stress was weakening my legs by this point, and went out to take the photo you see above.

"He's parked right in front of my business..." I heard him say on the phone. No police ever came. I didn't think they actually would.

After a few minutes he came back over to talk to the owner of the business I was at. I interceded. Why? Because no one in that whole complex had any legal power to tell me to move that car anywhere. It was me he needed to talk to.

"So just because you don't want to park where you belong..." the man said to me, gesturing to the disability accessible spaces.

"My placard is expired, Sir, I can't do that." I explained to him.

"No, it's the law." I will not make myself the worlds biggest hypocrite by parking illegally where I tell others not to park illegally. I even pointed that out to him, but there was no reaching him. I had to walk away.

"You know, it's just a matter of common courtesy." He said to me. I couldn't help but think I was the guy who needed a cane in the equation and it just didn't add up. Common courtesy for who?

So to sum up, he went out of his way to track me down, expected me to move for his patrons when he had no legal recourse to do so, and summed up with how I need to be where I belong, even if I break the law doing it... because it's just common courtesy.

Am I really out of bounds for wanting a public apology? I don't think so. Who is he going to do this too next? Would he still have hunted me down if I was a little old lady? And just to be clear, telling a disabled person they 'belong' in any space is highly discriminatory.

UPDATE: The owner has reached out to me via a third party (I will not mention names out of kindness because of this) to apologize to me. I will accept his apology, however I expect him to meet me in  person to follow this up. He has stated that in afterthought he was far out of bounds and the landlord has made it clear that no parking spaces may be claimed exclusive for any of the businesses in the plaza. I applaud his quick response, less than 10 hours from posting of this article.

UPDATE 2:  Through the third party mentioned above and a couple of other sources, it was made clear to me that our business owner (I know know him as Mr. Steven Kelley) intended to meet me at the shop I frequent to offer me requested apology. It's all I expect. Apologize to me and shake my hand. After that I would have altered this article so that it gave no names to include business. I was there for a whole 6 hours. HE NEVER SHOWED UP.  Clearly this isn't going to happen. So now this article can stay exactly as is. And sadly, that may not entirely be the end of it. There are people who care about me who are not happy with what happened. Word is spreading.
Posted by David Wilde at 9:37 PM 3 comments: