This is an insult to combat veterans and the autism community

PTSD (Post Traumatic Stress Disorder) is a very real affliction and comes to us in many ways. People who suffer severe trauma or are in a traumatic situation constantly, are high risk for PTSD. I think just about everyone understands that this is a bad thing. Examples of people who have PTSD include, combat veterans, bullying and abuse victims, rape victims, and survivors of catastrophic events.

I respect the pain of any one person. What I don't respect is behavior like this: 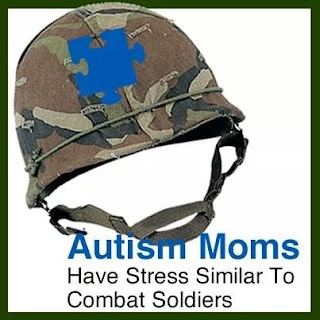 On the face of it, it's innocent enough, but at the bottom line, it's faulty. It's inappropriate. It's ableist (hard to believe I'm using that word), and it's an insult to every actual combat veteran out there. It's also extremely selfish. It also completely ignores someone more important than Mom and Dad, namely the child who suffers more than anyone. I'm about to share why this is totally wrong. I'm going to share the comparisons just like I did with some parents who believe in it (because there is a whole facet of the autism community that uses this and it's wrong).

How to compare to the stress faced by a combat soldier: TRIGGER WARNING

1: Watch all your friends DIE violent, explosive, and bloody deaths including complete dismemberment.

2: Wear your buddy's brains around on your shirt because he got his head blown off right next to you.

4: Fear common trash piles for the rest of your life because they could be a roadside bomb.

5: Have a society suicide rate of 22 a day. Yes, 22 veterans take their lives every day according to statistics LINK    (I am currently unable to find a statistic on autism parents who kill themselves, but I can find about 2 or 3 cases of parents killing their kids in the last 4 years)

6: Have a homeless rate greater than 8% of the total homeless community.

Now let me share the direct responses I had to this:

"My son has tried to choke me and his brothers pulled knives."  And yet you haven't had to live through 1, 2, or 3.

"While all situations are not comparable, the chemical reaction that goes on in the body is." Way to dismiss peoples actual experiences!

Important note: None of the people I spoke to was a combat veteran (yes I asked).

The missed the point entirely. Here's another way of looking at this:

Sounds fair to rape victims right? Or maybe this:

AUTISM MOMS SUFFER PTSD SIMILAR TO SURVIVORS OF THE JEWISH PRISON CAMPS OF WW2.  (Because you know, physical torture, gas chambers, and acute starvation are totally the same!)

Because we want people to think that our pain is held above anyone else's. They fail to understand that this diminishes the suffering of someone else and uses it inappropriately as a status booster for your own suffering. And the point stands that it is NOT similar at all. If you want to point out that autism parents suffer PTSD from their difficulties, that's fine. Let me retype that in larger print for those who just can't figure it out:

IF YOU WANT TO POST THAT AUTISM PARENTS SUFFER PTSD FROM THEIR DIFFICULTIES, THAT'S FINE.

Don't use someone elses statistics to bolster your own. Never mind the fact that you make your children sound like the most broken and useless things in creation. And you probably think they can't notice what you think of them in that way. Have you ever thought about the fact that just maybe they can? How would you feel?

I guess it would be okay for combat veterans and rape victims to start comparing themselves to autism parents, BUT THEY WON'T.

If you want to compare yourself to a combat veteran, go be one!

As for the rest. I will not support anyone who does this. It's a paramount of disrespect and the fact that you want to fight to keep it, says a lot about you.

Posted by David Wilde at 1:11 PM No comments: