UPDATE: THE AMOUNT HAS BEEN COLLECTED! READ UPDATE BELOW FOR MORE INFORMATION!

At this point the project is still on: Stan Lee is still scheduled for New Orleans.

I know, I was going to start posting the memoirs but something far far more important has surfaced.  I'm hoping that some of you out there are willing to do something to help out.

Many of you who read my work regularly, know that my son and I have a high functioning form of autism.  Though I went through life undiagnosed and through chaos, I'm doing all I can to make sure that my son doesn't have the same hard time.

So far that has been fairly successful. He has a great team of teachers and doctors, but he's had a hard time lately. Big changes have hit his life and he's struggling with them. It is now believed that he has to learn how to control child bipolar on top of autism. Yes, it is more than possible to have both.

Now he internalizes his struggles and gets angry with himself. He puts himself down, slaps and hits himself and we are scurrying to check med changes and help him any way we can. He has been on the gluten free diet for over a month now. He hates it however because he can't have what his friends get in their school lunches. This 10 year old boy, at such a crucial time in his life, needs a morale boost. It's one thing to tell him about the successes of others out there, but if he could meet his hero, Stan Lee, I think it might just set him on a much better track. He would see that good things do happen. He would see that he is worthy of those things. That's not to say we don't tell him he's worthy every day, because we do.

Stan Lee's name gets real excitement out of my son. For a school project in 3rd grade, he played the part of Stan Lee for his class's "living wax museum". In this he would stand in front of his desk and people would come and poke his shoulder. Then he would recite some of Stan Lee's biography. He hates being poked, people.  But he did it for Stan Lee.

Now we live in Monroe, Louisiana and Stan Lee is going to be at the New Orleans Comicon in November. That creates a once in a lifetime chance to take my son to meet his favorite celebrity Stan Lee right here in the same state we live in. But we need help to make it happen.

I also know that Stan Lee loves to help out young artists. He could to that in this case with a handshake and my kiddo is a very talented little visionary. See that picture up above? He was in 2nd grade when he did that with just cardboard. He still builds things out of his room that are mind boggling. Stan Lee knows heroes better than anyone. Well, this is about my little hero!

Just to show that I'm willing to make my own sacrifices I'm doing auctions  now too like THIS.

So how can you help?   You could start here:

Or you can order artwork from my Cafepress store or my DeviantArt page. We won't get much from the sales but every little bit will help and you'll have something nice to show for it.

This is totally for my son. If you have any questions, please feel free to email them to thewildeman2@yahoo.com.    Bless you for even considering aiding this project. I don't know how else to show he really is deserving.   OOPS... here is the cost breakdown of making this work. The target number we are trying to hit is 435.00.   Yep, just 435. Well, it's not such a small amount when you see the breakdown. That cost covers the following:

Convention tickets for Denver and one adult (can't send a 10 year old autistic in by himself after all) and that's tickets at the door. Not ordered ahead of time. So 140 dollars.

And with Stan Lee.... his autograph is 55 dollars and a photo with him is 80 dollars.

So what we are asking help with only covers getting kiddo that autograph and photo... it gets one adult and him through the door and into line. If either of us adults wants more that is our responsibility.

Now if you want to send him to the con with anything extra for his own use, you may specify and arrangements are completely open.  If we can just cover that 435, it would be a massive door opener and get him to meet his hero.   You can visit the New Orleans Comicon website HERE.

A lot more on why he's worthy HERE.

VERY IMPORTANT UPDATE As of 9-20-2012! Please read!:  Today we took Denver to the hospital program. The average staying time for the program is 7-10 days. That's really awesome news and I hope that's how this lands. The offer quite a bit out out patient programs as well and I think we will want to be involved in those. So the project can totally go forward. There's even more reason now than ever. When we are in that line and I get him to meet Stan Lee, I intend to tell Denver to remember it because awesome things can and do happen. END UPDATE 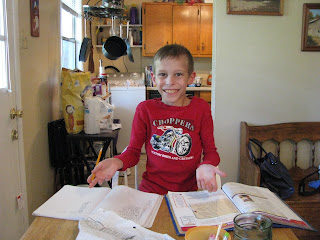 Fab fab idea!!! Could you let us know your goal and how far you are getting on? I find it harder to join in blind...
Does your little man draw or paint? Maybe he could put one of his artworks for sale??
All the luck in the world for a memory of a lifetime!

We will get that information together, for what the costs are. Denver builds things so him having something he can sell isn't as likely. That's why I showed the photos of what he does. Now he does it with a lot more than cardboard, he has a ton of legos. My wife does numbers and and as soon as she adds them up we will post in an edit to the blog for you. Thanks, I knew I missed something.

I have been an advocate for autism education for many years. All anyone has to do is look back through the postings of my work on this very blog to see that. I want to ensure everyone who reads this, that this is only about my son. If you could do something for your child or any child with autism that could so shape their morale, wouldn't you?