The Capital Riot (Understanding why and how things happened)

I've been seeing a lot of crazy posts about the big DC riot where a horde of Trump cultists decided to storm the capital building. A lot of theories and statements are flying back and forth.

First of all, let's lay one of them to rest right from the start. This was not Antifa people in disguise. Don't even try that with me. It's bullshit. There are now enough people positively identified to throw that crap right out the window. And crying "fake news" won't help anything either or make Trumpsters regain face (like they had any in the first place). So let's just toss all that  in the trash where it belongs and get onto the real deal.

Comparisons are being made to BLM protests/riots.

People are also criticizing the authorities for not arresting everyone, not holding everyone, or letting them out or in or whatever.

First let's take a look at how BLM is being compared to and used. I says 'used' because some people think deflecting to things that happened in the protests and riots of BLM actually justify the attack on the capital. But it doesn't. It just doesn't. Nothing in any of these events justify violence and destruction. Let's set that straight right now. You can point out similarities all day long and you still won't have a valid point. You also cannot just ignore all the things that make those events different.

First of all there are several points ignored about the BLM events. Let me list a few for you..

- Google "bricks on protest routes" and see all the reports of mystery pallets of bricks pre-delivered to protests routes in more than one state to instigate violence (what else could they have been for).

- The claim that people weren't being arrested in the BLM events is completely false. Not only that, several arrests turned out to be Trump supporters causing damage to blame on BLM.

-The majority of protestors were peaceful and even then were met with near military force. That is the one major difference worth taking into consideration; not to justify the BLM events, but recognize the racial difference for what it is beyond this.

-In none of the BLM events were government buildings stormed and internally ransacked. I will also point out that it wasn't BLM who decided to strap on rifles and take up state capital building to "protest covid shut downs" (because for some reason that requires guns).

-BLM protestors did not storm city parks to beat up every non-black person they could find like the Proud Boys did on more than one occasion.

-Finally, BLM protests by size and numbers make Trumpsters look like a corner street gang in a small town. BLM protests numbered participants in the hundred thousands in 2000 American cities and 60 other countries. That means that law enforcement could no more hope to "stop" the protests in any of those cities than they could hold back the mob at the capital.

And dead last but arguably more important, BLM had more reason to protest. Real reasons to protest. Trumpsters keep claiming they've lost their rights but have no evidence to compare. Either they refuse to acknowledge they are in the same boat as the rest of us (covid) or can't handle that they lost the election no matter how many investigations fail to find any wrong doing. Meanwhile there is 400 years of historical evidence that black people have been the most trod up on people in our country over any other. The only people who had it worse were the Jews from the Holocaust and that didn't last 400 years with new ways to destroy them at every turn and didn't happen in America. I may not have all of Jewish history on the button here, so give me a break. I'm not diminishing their pain. It's an example.

Now let's take a realistic look at the DC riot. First, yes, what they planned to do they have been forecasting for weeks. We all know this. I think, for some reason, they weren't taken seriously. Yeah, that's still a screw up because we know they are willing to strap on rifles and take up state capital space, so why not DC? We know factions of Trump supporters are willing to beat up black and gay people in city parks. We know they are capable of being violent. That being said, the decision to not beef up response was not made by the ground security forces already on duty. Please realize that is well above their pay grade. Those poor saps, for whatever excuse you'd like to enter were left to face down what turned out to be 3000 plus people forcing their way in a human tidal wave into a single building. But there is more to it than that.

What did they really know about this gathering? They knew there would be a gathering and likely didn't think anyone would actually take it further than that, because no one has before. Think about that for a second. If all they did was gather and wave their flags (as was likely assumed) nothing would have happened. Yes, I said they took up state capitals, but even then with their display of guns, they didn't do anything like this time. This was very different from all the other Trumpist gatherings, violence recognized. So this gathering started out like all the others, and then shifted gears.

That left the base security force so outnumbered that there was literally nothing else they could do. Yeah, they shot someone and beat up a few others, but they had no chance of stopping this event. Zero. This mob abandoned all sanity and reason except for one purpose, destruction. They could no more hope to keep everyone there to arrest them on the same point. One officer might have two pairs of cuffs on him and while some were arrested on the spot, the safest thing to do was exactly what they did. Let them leave. As it turned out, so many posted to their social media, waved at security cameras, posed for additional pictures, that arrests are slowly snowballing. And to once again compare that to BLM, don't even try. Over 300 arrests were made at the height of the BLM protests and they were all over the country, this is just one location. So lets stay realistic in our comparisons.

So far, almost 70 arrests have been made and nearly as many people have lost their jobs over the DC event. So I would say that the wheels of justice are definitely moving and would even go so far as to say that if you took the arrests in BLM to their separate locations, you would see comparable numbers per incident. So would the result have been different if it were BLM? 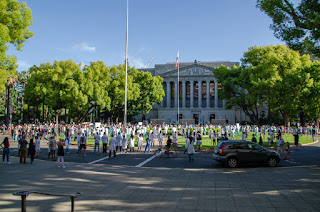 Well, BLM did protest at the capital building. But they they DID NOT try to overtake the building and were not all shot dead. Was there more security? Maybe, but I submit that, had they wanted to do what the MAGA crowd did, they could have with just as destructive results.

So, in closing I make a suggestion. Let's stop comparing in order to villainize and deflect and work on stopping ALL the violence? How about that?