Is it puberty mixed with Asperger's or something worse? 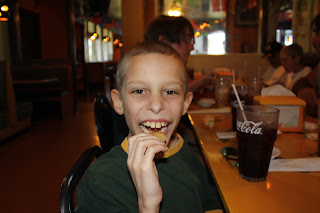 Last summer, my had a friend we will call L. They were inseparable and he wanted to play with her more than anyone else he ever met. Sadly, L lived a life that was unstable. She moved away at the end of last summer quite suddenly. The results were catastrophic. Today, I got a severe glimpse of just how much.

A terrible school year didn't help him at all and there was so much to deal with; we couldn't give enough attention to one underlying problem. Today, my son told me he has no true friends and never will. Think about that for a second.

On top of that, he's taken to talking to an imaginary form of her. He just told me he dreams about her every night and it wakes him up. Then he burst into tears.

So, he's created an imaginary friend, that has everyone thinking he's hearing voices that aren't there. He's obsessing over a girl who moved away almost a year ago. And what's sadder yet; he's right. He has no true friends on this block. He has no one that he feels wants to play with him.

Every day, he goes to houses down the block and wants to play with the other kids. He gets the brush off and he knows it. How must that kind of rejection feel? What he showed me today, just how much he's suffering. Now, what do I do about it?

We're on the lookout for summer programs, but once those end, what next? My son needs a friend. He just wants someone he can get silly with, play games with, talk video games with.

Today, the bottled emotions blew. Now what do I do?
Posted by David Wilde at 8:09 AM

Dave, that makes me feel so sad for that sweet boy. I don't know what your feelings are about prayer, but I've just applied it to your son, because I KNOW God hears prayers and answers them. I've asked, and will continue to ask Him to send someone to be a real friend to your son. Somebody who'll want to play, and play, and play. God bless.

Prayer is fine by me. Thank you.