Letters that target the disabled are sick

Let me jump right in with the link, because until you've seen it, you won't be as boiled over as I am right now.

FAMILY IN SHOCK AFTER LETTER TARGETING SON WITH AUTISM

Go ahead, it will open in a new window. Then come back, I'll wait for ya.

Now, as an added piece of asshattery, did you read the letter itself? No? 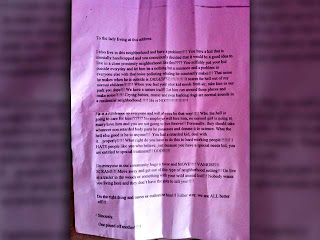 I so very much hope and pray they find this person. Who ever this is, she's the one with the problem, not the autistic boy she's targeting. Anyone who suggests to me that I euthanize my child is likely to lose some teeth. Yes, I'm a weak man, and that would be about enough to make me say "Oh screw this!".

The person who wrote this letter is a either a hateful idiot or has a whole encyclopedia of her own problems (likely both).  But I tell you what, they are looking for her and really, it shouldn't be that hard to find her.

1. She's close by. Very close in fact. Walking distance judging from the fact she "hears" the autistic boy's noises outside.

2: She has children as in plural. She even says so in the letter when pointing out that the noises scare her "normal CHILDREN". I'm pretty sure, only a handful of Mom's in the area are going to fit the bill.

Another point. Look at the paper. It's either previously used xerox paper or came from a printer with a toning problem. Either Mommy has a bad printer or uses paper from the recycling bin, or Mommy did this at work with paper form the recycling bin. If that's the case, Mad Mommy works in an office setting.

Now I'll go out on a limb and say that this isn't the first rager Mad Mommy has been on. I would say, not only does she have her own severe mental illness issues, but may also have a record. No one tells you to off your own child unless they are cruel trolls or severely mentally ill. It's just that simple.

Now, she's a coward; so she's going to put on a really big "Nice Mommy" act when spoken to. She'll sound just like the parents who really are shocked and disgusted, only with her, it will be fake.

So, for you folks in the neighborhood manhunt, let's recap:

She has two or more children, is severely stressed out and bad tempered, lives in close walking distance, may have a record (may even be a problem neighbor already), and either works in an office setting or has a really crappy printer and uses scrap paper.

I'm here to tell you, it would not take me long to find this person. Of course, no one would want me to do this.

What is wrong with people? Because this isn't a rare issue. It's happening in more and more places. People deciding to go all nasty on families who have enough to struggle with. Psycho's who somehow think they are the disability police will leave notes to harass and even threaten.  Earlier this summer I saw a case where someone put a letter on a lady's steering wheel, nagging about parking in the disabled spot. According to the author of the note, the lady didn't "look disabled". Well isn't that nice?  Too bad they're such cowards. Even the jerks in Portland who claim they will out people with disabilities for some psychotic political rampage.  Look it up.

But, people, if you get a threatening letter, don't be weak like me. Call the police and file the complaint. Put them on the news. Press charges. Don't go to jail for them. That's more where they belong.

Well written reply. I do hope they find this person of interest. This person doesn't understand the worth of a soul or what lesson a person of disability can teach!! They are both learners and teachers. Who ever wrote this has issues, you are right about that. I am a man that Love God dearly, he has pulled me along my whole life one way or another. This child just like your Boy is a child of God. I hope this person who wrote that letter has a testimony of that and become keenly aware of that. When we know that and really begin to understand the true worth of a soul, they we are open to heal, help or at least offer a kind word VS. a hateful one. God Bless you and yours... Hope that God open that hateful persons heart and they can heal others and apologize for the hateful letter publicly.