LANGUAGE WARNING
I realize this kind of language is not the norm for this blog, but this is a special situation. Just be warned.

For those who have been following my tiff on Facebook about the anti-vax propaganda, this should come as no surprise, especially with my recent experiences. I had no idea just how insane the anti-vaccine cult really is, but I got cold water introduction! So I'm going to be very candid and blunt here. Vaccines save lives and trying to abolish them WILL GET PEOPLE KILLED. Not that you can explain that to an anti-vaxxer. They have a one way mind that is immune to actual scientific fact. I can actually almost prove that.

Small recap: What started this for me was some yoyos telling me that I'm a traitor because I have autism and I'm not viciously anti-vaccine like they are. And frankly, I've had it with the ridiculous propaganda geared to misinform and fear monger people away from vaccines that keep deadly and disabling diseases at bay. And, of course, they can't leave well enough alone so this is what it comes to:

So I've done just that. I made memes and shouted from the rooftops and that sure got their attention (finally). I started out with a general message saying to just drop me, but that wasn't enough. Once I joined a pro-vaccine Facebook page though.... that brings me to stupid thing number 1: 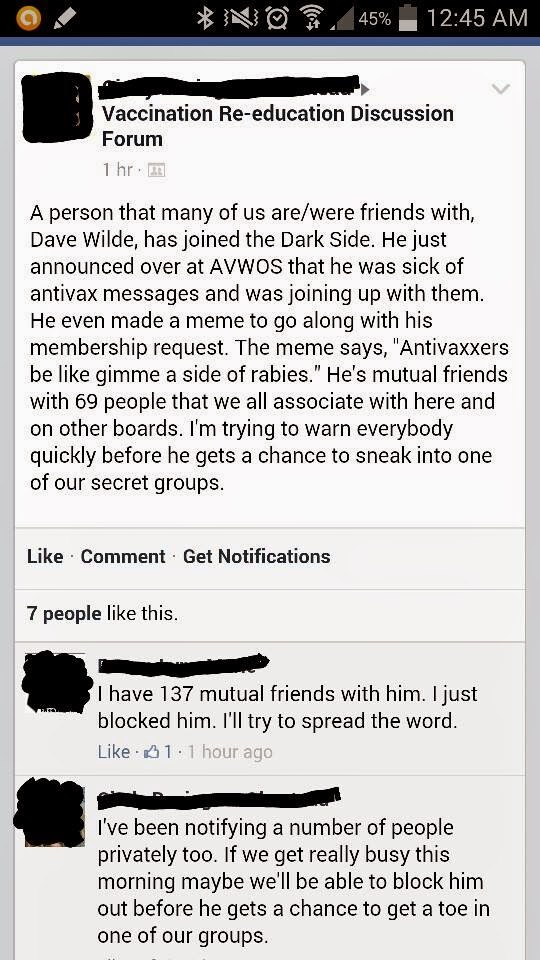 GETTING VILLAINIZED: Check that out. Apparently I'm so dangerous I warrant a call to arms! I've been dropped or blocked by over 30 people. One even left a nasty message on my wall before blocking me in order to run away. If this is how they handle rejection, why would anyone want to be like them? Worse, are they really so paranoid that they think I'm going to start stalking them? HAH! Go ahead, you fruitcakes, block me. It means I don't have to see your garbage any more. This behavior just concretes my position. I'm glad they're scattered across the country and not local or I might get lynch mobbed and set on fire. I am being smeared and misquoted but I really don't care. Screw em. 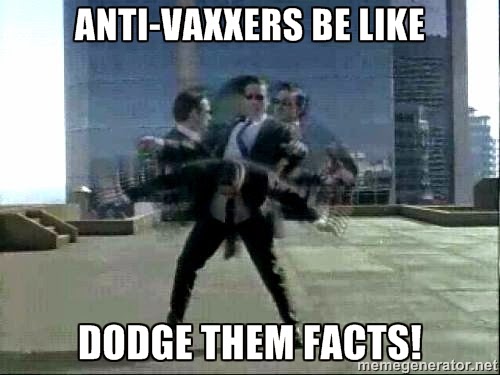 FACT EVASION: I've actually tried debating with folks in the anti-vac crowd and WOW. These people dodge facts better than a deadbeat dad avoids child support. It immediately reminded me of a scene in the Matrix. It doesn't matter what source material you use, what historical figures you show, they'll either pretend they don't see it or claim it's a big pharma lie (with absolutely no evidence). Holy shit, I've never seen mental contortionists like this before! 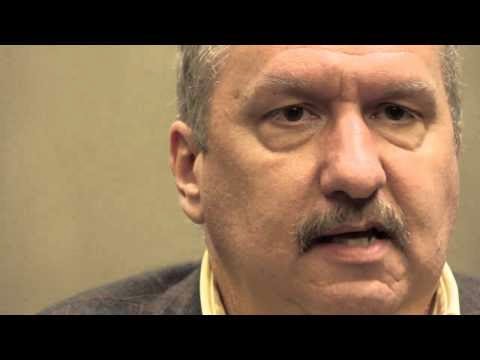 CDC WHISTLEBLOWER: Speaking of facts; some guy goes and digs up a dead horse study, picks and chooses what he thinks works for him and creates this whole whistleblower campaign. That would be this guy, Brian Hooker. He even chumped a CDC scientist and recorded him without given knowledge. Since this debacle, some of the most respected authorities outside of the CDC and around the fucking world, have gone over his supposed find with a fine toothed comb and DEBUNKED IT. But none of them care. They grasp any straw of desperation they can find to abolish all vaccines. It's pure insanity at it's best.

OBSCURE EVIDENCE: That isn't evidence at all. It's all guilt by association coincidence. You show them a thousand pages of information that proves vaccines don't cause autism and they'll come up with an obscure sentence from the back of a cereal box that seems like it could support them if we lived in an alternate dimension. As soon as you point out the flaws in their supposed evidence they completely lose their shit (see Facebook image above).

BUT THE GOVERNMENT LIES! Yeah, sure they do. Oh, but HISTORY DOESN'T! Instead of hand picking a collection of snippets from propaganda papers, try going to a library and picking up and actual BOOK. They call out for us to do our research, we do, then they go nuts.

EBOLA: Let the insanity explode. I've had these people try to tell me that Ebola is airborne (BULLSHIT) or being used to cull the population (SUPER STEAMING BULLSHIT). But the big fave for me has to be this: according to the anti-vax crowd it may be caused by vaccines. Have you ever come across something so amazingly fucking stupid that you immediately raced across the room and put your head through the wall? It should be extremely painful to be that dumb. 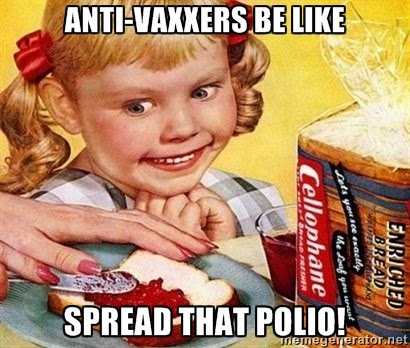 These people are truly scary. I understand those who have dealt with vaccine injury, I really do, but there's also NO way of knowing if that is what truly happened, even if the timing is right there with when your child got their shots. And vaccines do not cause autism! VACCINES DO NOT CAUSE AUTISM. Vaccine  injury mimics autism very well, but if your child has Asperger's, they DON'T have vaccine injury.

Something has to be done. People are being scared into following this quackery and it's going to bring back some disease that will truly fuck people up. You want me to wake up? You first, nutbar.
Posted by David Wilde at 9:57 AM

Sorry you lost friends (or associates) over standing up for science.

It is my belief that the failed myth of "vaccines cause autism" is held by a tiny minority -- both of autistics and parents of autistic children.

Those that do hold the belief are very loud and passionate -- and mostly talk to each other.

All too true, Liz.

What disgusts me the most about these really die-hard anti-vaxxers, the ones that TRULY believe that vaccines caused their special snowflake to develop autism, is how they TREAT said kids with autism.

They act like autism is a disease, that it's something that NEEDS to be 'cured'. And some of these so-called cures? Chelation? Chemical castration? Bleach enemas???? Those poor kids. Being made to suffer for something that they themselves have absolutely NO control over.

And when you try to call the parents on such BLATANT abuse, they act all holier than thou how dare you tell me how to raise my kid?

Autism is not a disease. It's just that people who are autistic have their brains wired slightly differently than 'normal'. And yes, low-functioning autistic children can be challenging, but that does NOT make autism a fate worse than death (as I've heard some of these anti-vaxxers say).

They need to pull their heads out of their asses, realize what a PRECIOUS gift their child is (I have a friend whose eggs are not viable and she would KILL to have a baby, even if they had autism) and do the right thing and vaccinate, not only to protect their special snowflake, but to protect other children and members of the community.

Because that's the true 'toxin' here, their selfish disregard for others and the impact that their decision has on the wider community.

Grow up anti-vaxxers, admit you were wrong and do the right thing.

great piece David! ty for writing and sharing it and we are glad to have you here with us on 'the dark side' lol

Thanks Nygirl and LOL Jack