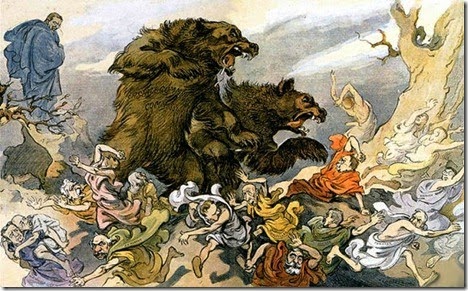 Ever present in my Facebook feed, are the commentaries regarding Muslims. Some people say they want to kill every single one of us. Others say that only the extremists want to kill us. I've come to a couple points of logic on the matter.

The thoughts come to me by comparing our own Christian bible with the talking points on the Quran. I'm sure you know the ones I'm talking about. The ones that say to kill all infidels? And it's true, the Quran does say that all "enemies" or non-believers should be killed. Yet, in all fairness, our own bible does much the same thing, having roots in the same area of the world.

Take 2 Kings 2:23 for example where the Prophet Elisha called a curse down on some unruly children causing them to be mauled by bears.

Deuteronomy 25:11 where it explains that any woman who harms a mans family jewels shall have her hand cut off. Show her no mercy. So all you ladies out there who ever kicked a man in the nads, so sorry!

Deuteronomy 23:1 where it explains that any man who has had his nuts crushed or unit removed may never enter Heaven. If you want to really put this in perspective, Google Lorena Bobbitt. Never mind all us poor saps who've ever been racked in life.

But here's the thing (while some of you are fuming at me for supposed mockery), I've never been to a church service where any of these things were taught to me. Have you? I'd say I've been to a fair share of services. Not one, not a single solitary one ever taught me to cut anyone's hand off for messing with my junk. I've been to a variety of churches too!

Yes. Those things are in the Bible. Why? Historical significance. They are not there for us to teach people to do in this day and age. Funny how similar that is to the Quran. So maybe we should stop looking at the book and start looking at the people?

The way I see it now, there are two kinds of Muslim. One kind is chopping off heads and declaring that we all need to die. The other condemns this behavior. Oh wait, I've seen comments where people don't believe that. Let me show you:

Go on, check it out. And there are more gatherings just like it under #notinmyname. It's a vast movement with Muslim citizens in France, Germany, England, and yeah, even the good ol US. For some reason, they don't agree with going around beheading people. Imagine that!

So no; not all Muslims want us dead. It's time we learned the difference.